​Setting the Hook for a Younger Generation

The report indicates there is a steady

decrease of angling participation across

the nation for millennials over the past

Cameron Carter is a millennial. He is a

4-H member, and founding member of

his passion for fishing by helping his

mother and father, who are TPWD

teach basic fishing skills to youth in their

community, setting the hook for a

excitement in his story below, as he

describes the anticipation and thrill he

experiences when fishing. With the help

of our volunteer instructors, hopefully we can change the trend for millennial anglers.

By now you may have noticed how all of my projects in one way or another, go back to fishing. You might wonder why this little sixteen-year-old boy could be so fascinated with it, to the point that he can’t take his mind off of it long enough to write a coherent paragraph, without mentioning it. It’s true, the very thought of fishing is something that hardly escapes me, and because I wouldn’t want anyone to feel left out, let me explain why: nothing compares to the chain of events that comes after casting a line out to an open space, letting it hit the surface, then bearing the focused silence that seems to overwhelm your body while it sinks to the bottom. You pause for a few moments at the prospect that a fish could be at the very spot you just casted, quite possibly looming over and menacing as it inches forward to stare your bait directly in the face through its callous eyes. You begin to slowly work your bait back to the boat, popping it up sporadically, pausing off on and on from time-to-time in this charade of duplicity. In attempt to be organic, your goal at this point is chiefly, to create a deception that transmutes this artificial piece of plastic into some type of forage. You pause again, eager that something is interested (give whatever is engaged, the time of day), and if something hits, you willfully ignore the natural impulse to feverishly bring it in. Once again you resist, wait and anticipate for at least about a half of second; this is to make sure that the tug you felt was in fact a fish that has interacted with your lure, not just a branch or some other type of cover. In these instants of pent up adrenaline, it’s at this point you methodically begin to reel all the slack out of your line, lean into it, and set the hook. The dream each time is to complete a clean hook set, and this aspiration is met once you feel the weight of the fish, and the fish fighting back. If you don’t, unfortunately that means you’ve not fashioned a successful hook set, thus leading to the eventual loss of the fish. Once you’ve completed a good hook set however, you have pretty much sealed the deal for landing the fish, and already the excitement reels over your body at the notion you done captured the fish already as my father would say it. Excitement grows to new levels as you begin to make assumptions about what you’re working with by the bend of the rod and the strength of the fish pulling against you…from there on it’s just fighting it in avoidance to any possibility it may get wrapped around in any cover or other hindrance that could cause you to break off. This fight is not a strong man, brute force game, but rather an eloquent art form between two Brazilian Jiu-Jitsu combatants in the octagon, with exceptional prowess and technical skill. The angler must pull with just the right force and vigor, careful not to pass the threshold of too intense and not intense enough. The idea is to keep sustained pressure so the hook doesn’t come out, but to have enough restraint to avoid the hook from bending. At any point where you are just winding it in as fast as you can, you face a serious risk of breaking your line or this hook bending out. Slowly but surely, you continue the process of working, fighting, corralling, shepherding, ushering, attending, leading, and wrestling it back towards the boat. At the point when it’s finally reached the boat, you anticipate the fish coming out of the water to deftly secure the fish in a net, because if you don’t, the floundering creature will undoubtedly flail vehemently, flopping around and squirming for a way out…and the more he flops around and contorts himself outside the water, the more likely he’ll be to shake the hook in a last ditch effort for freedom. Forestalling the fish breaching the surface, you are frantically, excitedly and fanatically (but very much manically), calling for your partner to get the net in keenness to this foremost significant and climactic moment. It is a progression of pressure filled final moments followed by the temporary moments of excitement, tranquil peace, contentment and gratification. It’s temporary but once you are comfortable you only look to find that series of emotional events once more, looking for that rush yet again. From there you are always chasing that fight because the satisfaction is short lived; some may say you can get addicted to fishing, hook, line, and sinker.

Welcome 4H to the sportfishing project! We have a schedule of events for beginners as well as the experienced ...come have fun with us!!!

Check out our latest news article in the Community Impact Newsletter:  https://communityimpact.com/houston/tomball-magnolia/education/2016/08/31/magnolia-west-anglers-club/

The first hour we will go over the tournament trails in detail and have a time of questions and answers.  The second hour will be for registration and brief details for our returning anglers and we have a lot to new information to share as well. You are welcome to be at both meetings and would encourage that for our new anglers.  We scheduled the meeting this way so that returning anglers would be able to skip the beginning orientation.  If you plan to eat come early and place your order as we try to quickly go through a lot of info.  If you have questions you may see Mr. Clugston at school or Robin at (832) 276-8962.  Thanks Cam 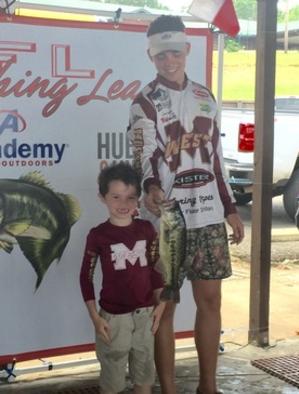